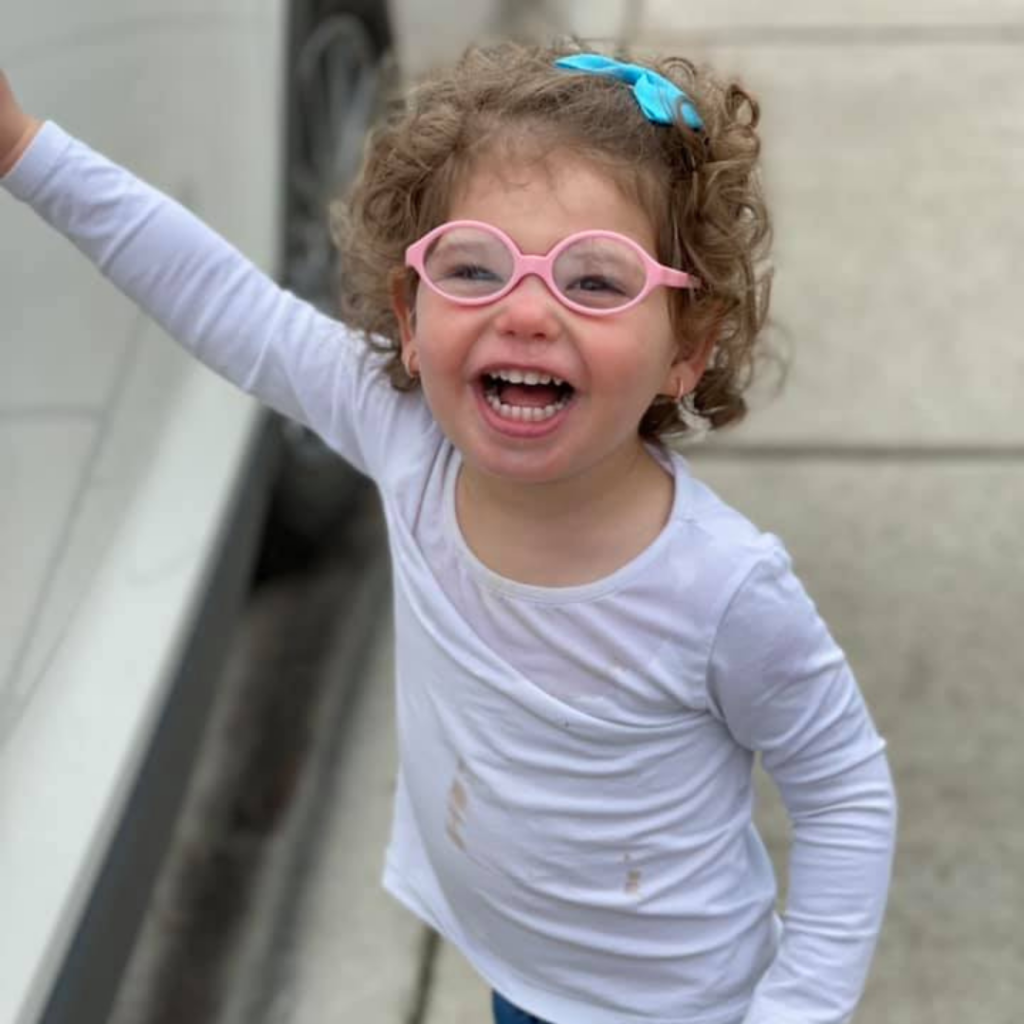 Up until 2.5 years ago, I, like most people, had never heard of HIE. Since April is HIE Awareness month, I decided to write a little about our experience.
It was Sunday, October 7, 2018. Once again, I hadn’t felt the baby moving. I drove to the hospital to get monitored, thinking it would be like the last few times when I was checked out and sent home with the all clear. When the nurse couldn’t find the baby’s heartbeat, I was immediately rushed into an emergency c-section.
Nava was born colorless and floppy, without a detectable heartbeat. Her APGAR scores were 0 at the 1, 5, and 10 minute mark. Thank G-d, the ISCU team kept up their efforts–and at 13 minutes Nava’s life was restored. The neonatologist who saved Nava’s life told us that Nava was in very critical condition, that her organs weren’t working properly, and that we should prepare for the worst. Everything felt surreal, like the worst possible nightmare.
Nava was immediately intubated and hooked up to several monitors. The protocol for HIE is cooling therapy, where the baby’s body temperature is lowered to help prevent further damage from occurring. HIE stands for Hypoxic Ischemic Encephalopathy – a shortage of oxygen in the blood, shortage of blood flow to the brain, resulting in a brain injury. Unfortunately, there are many different causes for HIE. In my case, the umbilical cord was thin and hyper-coiled. We do not know exactly how long Nava went without oxygen.
We spent 18 days in the Evanston ISCU. As is common with HIE babies, Nava endured many, many seizures (over 80) during her first 24 hours, and she was subsequently placed on anti-seizure medication. The first week was the hardest. Nava’s entire body swelled up until her kidneys started working properly. She needed platelet transfusions. She was not only intubated, but also hooked up to a constant EEG to monitor her seizures and brain activity. The first time we were able to hold Nava was on Friday, 5 days after she was born. It was the same day that Nava had her MRI.
When the doctor went over the preliminary MRI results with us, I remember asking if she would be able to smile and if she would know who we were, that we were her parents, who loved her so deeply. The optimistic doctor gave us a reassuring yes, and that was the glimmer of hope we needed.
In the haze of all of this, we searched for support, and thankfully we found it in a Facebook group for parents of babies born with HIE. We learned a lot over the past 2.5 years. Many babies born with HIE end up with other diagnoses, like cerebral palsy, autism, seizure disorders, attention disorders, developmental delays. However, just like there are many different causes of HIE, there are also a range of outcomes. This Facebook group continues to be instrumental in my life.
We had no idea what to expect for Nava, but it was clear from the start that Nava’s main interest was changing predictions. She was discharged from the ISCU long before most of the doctors and nurses thought she would be. She came home looking like a healthy baby, eating by mouth, and taking only one medication which was to prevent seizures. Those first few months were mixed with tremendous gratitude to G-d and intense worry about what would be. I would literally whisper “Thank you G-d” over and over and over again as I held Nava in my arms and rocked her to sleep. Having her home, sleeping next to my bed, felt like half the battle was won. But I would also worry, about everything, all the time. Every doctor we saw told us that with HIE you have to “wait and see.”
On Nava’s medical record from the hospital, her neurologist wrote that based on how Nava presented at birth and in the days following, she predicted Nava would have “moderate to severe life-long dysfunction.” But that was a snapshot in time. Months later, Nava had a normal EEG and was weaned off of her meds. This same neurologist is always overcome with joy and amazement when she sees how well Nava is doing, and that initial prediction is no longer relevant. We have seen the wonders of neuroplasticity firsthand, and there are no words to express how thankful we are every single day.
For those of you that don’t know Nava, she is my actual HIEro. She’s had hundreds of therapy sessions over the last 2.5 years. When Nava was 9 months old, we found out that she has mild-moderate hearing loss, so she wears bilateral hearing aids. We recently found out she needed glasses, and while glasses on babies might be cute, it’s a bit of a challenge with the hearing aids. But in the scheme of things, it’s a tiny challenge, and I am beyond thankful for such tiny challenges. Nothing gets in her way. As several doctors and therapists have noted, her stubbornness has served her well over the years.
If you’re still reading – I’m impressed! And thanks! I could probably write an entire book about Nava and everything we’ve been through, so this is actually a very abridged version. I don’t post often, but I did want to write something for HIE Awareness. For those of you who are familiar with the poem “Welcome to Holland,” my experience with Holland has been pretty amazing.

Board of Directors Change

Call for Board of Directors Members

Hope for HIE collaborates with Families’ Bridges to Caring Hands

Hope is an adventure – choosing hope and exploring new places

Support Hope for HIE on the RoundUp App

Carving a Path for Your Child