“As long as my baby is born healthy” 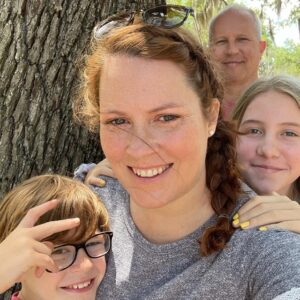 A PICU Journey with HIE – by Amy Bannister DiGiacomo

Expectant parents say this all the time. I probably said it too, until my second child, Oliver, was born. Now the phrase hits me in the chest when I hear it.

Oliver’s birth was fine until it wasn’t. When he was four days old, he stopped breathing in my arms at home. The seconds and days that followed are a mix of blurred and painfully detailed memories. I remember trying to “wake” Oliver up with movement and chest compressions. He cried, and the blue tinge around his mouth turned pink. He seemed fine.

My mom came over to watch our older daughter while my husband and I rushed to the pediatrician’s office. The doctor measured inconsistent oxygen saturation rates and blamed the equipment. He sent us to the nearby community hospital for a recheck. A maternity nurse and lactation consultant saw the same fluctuations and sent us down to the emergency room. The ER doctors called an ambulance to take us downtown to the children’s hospital, where they ran blood and urine tests and did a lumbar puncture to check for infection. They admitted Oliver for observation.

Over the next 24 hours, Oliver continued to experience desaturations more frequently. Sunday was Mother’s Day—and the day they called Code Blue on Oliver. The crash team rushed him to the pediatric ICU, or PICU, where they placed him on life support.

We spent a week in the PICU. Tests revealed seizures and a white matter brain injury, later identified as Hypoxic Ischemic Encephalopathy (HIE).

The PICU shared a hallway with the NICU, the neonatal ICU for newborns. When we were there, I wondered why my tiny baby was in the PICU. Why weren’t we in the NICU, with all the other babies and neonatal nurses and doctors? The NICU had dedicated lactation rooms, tiny see-through cribs, and rocking chairs for parents to hold their sick babies. In the PICU, we sat watch over Oliver in a room full of 20 older children and teenagers and their families, separated only by curtains on the sides. I lugged my breast pump to and from the hospital, trying my best to pump without privacy from everyone else in the room. Oliver was propped up in a bed with blanket rolls surrounding his little body while my husband and I took turns sitting in the discarded conference room chair next to him.

Once medicines controlled the seizures, Oliver weaned off his breathing tube and then his feeding tube. Days later, we graduated to a step-down care unit and then were discharged two weeks after we arrived. We left with just a CPR refresher, heart monitor, and a scheduled follow-up with neurology—no referrals to support groups, early intervention resources, or education about HIE and what it would mean for our child.

HIE can occur in utero, at birth, or acquired during childhood. If the child is diagnosed at birth, they may be admitted to a NICU where therapies like the newborn cooling protocol can be administered. Children who acquire HIE later, whether days after newborn discharge or in childhood after a hypoxic event, may be admitted to the PICU like us. Currently, therapeutic cooling is only available to infants within the first hours of life.

Since our experience in 2012, the children’s hospital in our town has built a new facility, including a family-friendly PICU. Thanks to massive efforts from the Hope for HIE Foundation, a non-profit organization supporting kids like Oliver and their families, the hospital now connects new HIE families to Hope for HIE. Together we are working to ensure no family faces HIE alone–in the NICU, PICU, and throughout life after the first hospital stay.

If you know of a family of a child recently diagnosed with HIE, please refer them to the Hope for HIE Foundation at hopeforhie.org.