Jill’s son Alex suffered HIE at birth and has since been diagnosed with quadriplegic level five cerebral palsy, epilepsy, chronic respiratory problems and has cortical visual impairment. He is also a sweetie who loves swinging and being read to and is an awesome big brother to his baby sister, Talia.

Jill found Hope for HIE and began connecting with other families who are affected by HIE, and she found support from families all over the world, with children who have a wide range of outcomes.

“I got to see firsthand how powerful and healing spending time as a community could be for other parents and myself,” she said.

And she wanted to share that with others. As the Vice President of Professional Outreach on the all-volunteer Hope for HIE board of directors, Jill works to educate and promote awareness about HIE by building relationships with multiple medical and professional groups, who can also connect more families with Hope for HIE.  Recently, she has worked to forge a partnership between Hope for HIE and researchers in the United Kingdom.

“We all deserve that, and I wanted to be a part of making it happen for anyone who wanted it. We all deserve to belong and know that we are not alone,” Jill said.

For Jill, hope means celebrating the good days and recognizing the bad days are often just the storm before the sunshine, she said.

“It’s learning to release expectations and opening your eyes to the beauty right before you. It’s learning that there is love at a level you never knew existed. It’s knowing that I’m stronger today than I was yesterday but not as strong as I will be tomorrow,” she said. 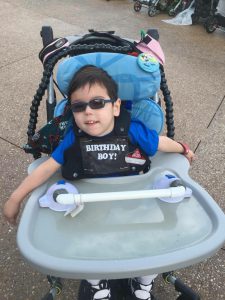