Annie’s daughter suffered HIE at birth. Five years later, she has a slew of other diagnoses, including spastic quad cerebral palsy, seizure disorder, cortical visual impairment and developmental delay. But she also has a smile that can melt anyone’s heart.

Months after her family left the NICU, Annie found Hope for HIE, where she connected with so many other families like hers. They could share suggestions for therapies, vent about tough days and celebrate any and all achievements.

Finally, she knew she wasn’t alone.

“I had this idea that what had happened to us was so rare that we had no choice but to figure everything out on our own. I had so many questions and so many worries, and had nowhere to turn,” she said.

“But then I found my village, and I had a place to go to — no matter what time it was or what I had on my mind. Someone was there.”

That feeling of having a community became a passion for Annie. She now serves as the vice president of marketing for Hope for HIE, and works to share fellow families’ stories and spread awareness.

“I needed something that would give me purpose, I needed something I could take from our experience and make it into a good thing. If I can help fellow HIE families find support, then I think I have done that,” she said. 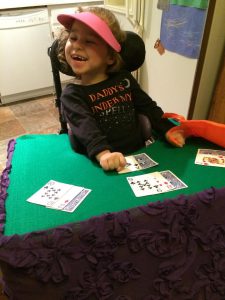