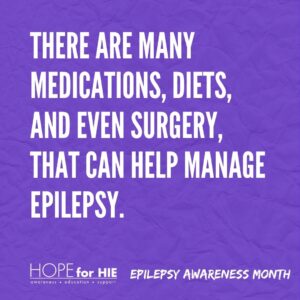 A neurologist may suggest medications after a child has a second seizure, or if there’s enough reason on an EEG to look at medications to stop activity that could lead to seizures. There are dozens of approved medications for epilepsy, and more being developed all the time. There are also extensive research studies being done to identify which medications may be best depending on the pathways someone’s brain has within various channels.

Sometimes it may take a few tries to find the right medication, or the right combination of medications to find seizure control. There are also some other options.

There are certain diets, like the ketogenic diet, that may help control seizures. Unlike the fad keto diet for weight loss, medically-introduced and controlled keto is done with a nutritionist and medical team to manage the ratios that optimize seizure control.

Ketogenic diets can cause lots of issues and unintended, damaging side effects, so it’s best to discuss and start this under close supervision. DO NOT attempt to start the ketogenic diet by yourself.

For some HIE children, epilepsy surgery may be a good option. According to The Brain Recovery Project, Epilepsy surgery is any type of brain surgery where parts of the brain are removed, disconnected, destroyed, or stimulated to stop seizures. There are many different types of epilepsy surgeries. Which procedure is used depends upon the type of seizures presented, where they are localized in the brain, and the training and experience of the neurosurgeon.

There are two pathways for surgery – curative and palliative. For HIE, curative may not be an option, but many children have seen success with palliative surgeries like vagus nerve stimulation, and cortical and deep brain stimulation.