When the brain is deprived of oxygen, brain cells are injured.  Some may recover, some may die.  The most common causes of oxygen deprivation to the brain are low levels of oxygen in the blood or a reduced flow of oxygen to the brain. This can happen in a variety of ways prior to birth, during the birth process, after birth, and during childhood. Different alternate diagnoses include perinatal encephalopathy, perinatal asphyxia, neonatal encephalopathy or birth asphyxia.

There are two stages of injury with HIE: The first stage happens immediately after the initial oxygen deprivation. The second occurs as normal oxygenated blood flow resumes to the brain. This is called “reperfusion injury” and occurs as toxins are released from the damaged cells.

Diagnosis of HIE in a newborn baby is made using a few different diagnostic tools, in combination.  Physical exam, APGAR scores, the Sarnat Scale, which is based upon how the baby appears after birth or injury, and presentation at the hospital, in addition to diagnostic tools and imaging such as EEG, ultrasound and MRI, and checking cord blood gas levels. 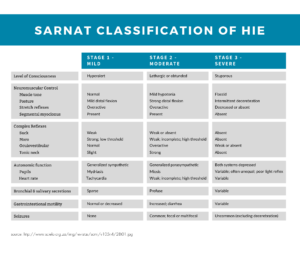 About two to three in every 1,000 full-term births will be affected by HIE every year, which means thousands of babies and children experience HIE every year. We are on a mission to ensure none of their families face HIE alone, and to improve the quality of life for this community.

You’ve gotten the diagnosis: HIE. Your world is spinning. You don’t really know what it means. And you feel so alone.

Some will have gotten the diagnosis at birth, with confusion setting in while still in the delivery room. Others will come into the HIE world after their little one suffers oxygen deprivation through a medical issue, a near SIDS event or an accident.

The first days after your child’s diagnosis will likely be spent in a hospital, crouched over your little one’s bed with tubes, wires and beeping machines. Doctors and specialists will use terms you have likely never heard, and some may give you news you don’t want to hear.

Eventually, the moment you’ve dreamed of comes around. You can go home – where suddenly you wish you had the comfort of the nurses, machines and monitors back again.

Those first few days and weeks can be incredibly tough. You may feel alone and have so many questions that you don’t know how to answer. What do the MRI or other test results mean? How do I deal with feeding difficulties? What does this medication do and why does my child need it? How do I use the medical equipment the hospital sent us home with?

And then there is the nagging question we all ask: what is the future for my little one and my family?

No matter what prognosis your child has been given, the only real answer is that you will have to wait and see. And that is the hardest part. As the months stretch on, you will closely watch your child for milestones. When they meet them, you will cheer! When they don’t, you will worry.

You will be stressed, sleep-deprived and unsure, but in a way most parents would never understand. You must remember to care for yourself – watching for signs of depression or PTSD.

Through all the trauma, try everyday to enjoy your little one. There may be struggles and uncertainty, but that little baby or child is still your precious little one. Take pictures, play, snuggle and give lots of kisses and hugs – which are therapeutic on their own.

Eventually, your life will find a routine. Therapies will become manageable. Your schedule with doctors, specialists and therapists will even out. And you will make it!

And never, ever forget that so many have been there before you. They can provide knowledge, support and an understanding ear. Don’t hesitate to reach out.

HIE can affect many things along the way. We’re here with you no matter what you may face.

The outcomes of children with HIE are wide-ranging – anywhere from unaffected through loss. No two children will be the same, even with a similar injury pattern. The impact of each child’s injury is different based on multiple factors, including what parts of the brain were affected and how damaging the insult was to the brain, and how each child’s brain moves forward from injury through neuroplasticity. 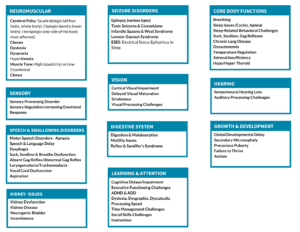 HIE has many causes and sometimes it is even impossible to determine a cause as there are so many factors. The majority of cases (research estimates 70-80%) are not preventable.

High-Risk HIE Causes
Sometimes HIE can be caused by medical situations that put someone in a “high-risk” category, such as:

Sometimes HIE can be caused by various umbilical cord issues. Cord entanglement and compression is rare, but can occur. Sometimes a mother might notice a change in movement during pregnancy. Many of our families had “kick count saves” where movement stopped and they went into Labor and Delivery and their baby was born and resuscitated. Cord compression can happen intermittently during pregnancy or labor. HIE from too much or too little amniotic fluid, can also affect the umbilical cord leading to HIE.

Examples of cord issues include:

Whether associated with a placental abruption, or just spontaneously happening, sometimes fetal-maternal hemorrhage is a cause of HIE. This occurs when a bleed happens internally and the baby and mother both lose a significant amount of blood.

HIE from Placental Issues
The placenta is a fascinating and understudied organ. It is very difficult to detect placental issues through standard imaging. There are new research studies underway through the Human Placenta Project to help understand this vital organ in hopes of catching and preventing issues, like those that can lead to HIE.

Placental previa can also occur where a vaginal delivery would be unsafe for the baby. Placental previa is routinely caught and a c-section is recommended if it does not move during the remainder of pregnancy.

HIE from Uterine Rupture or Other Uterine Causes
Uterine rupture is another cause of HIE. This can happen spontaneously, or due to another incident such as trauma, or during an attempt at a VBAC (vaginal birth after cesarean), where a scar could potentially cause a thinning in the uterus leading to rupture. It is highly recommended to work with a trained physician, or a high-risk physician, to determine your risk factor for birth options and repeat of issues.

Causes such as shoulder dystocia, where a baby gets “stuck” due to a position or a large baby, may or may not be preventable. While imaging can take a best guess at the size of a baby, many times ultrasound is inaccurate and a baby may be larger than originally predicted, or a mother’s pelvic girdle is not wide enough to birth a child vaginally.

Occasionally, with the above possibilities such as cord compression, placental abruption, etc. some babies need emergency c-sections if there are distress factors that occur. Sometimes these are preventable, and sometimes they are not.

HIE from Blood Clotting Disorders
Many blood clotting disorders are not detected until something goes wrong to bring them to light, as they are not standard panels and are rare. However, many of our families have found out post-HIE that they are carriers of various blood clotting disorders such as MTHFR. More research is needed to see if there is more of connection and if certain blood tests would better screen for potential issues to the mother and child.

HIE from Post-Birth Causes
Many families have babies whose HIE was not obvious right away, or who developed HIE in post-birth situations. Some of those include:

HIE from a Cardiac Arrest or Near-SIDS Event in Childhood

Because the combination of a lack of oxygen and lack of blood flow to the brain can cause HIE, some children who experience cardiac arrest due to several different causes, or a near-SIDS event in childhood, can experience HIE. Sometimes these are near-drownings, sometimes accidental smothering during sleep, and others due to unexpected physical trauma.

Regardless of cause, Hope for HIE welcomes all families to join in our support network of over 6,000 families from around the world.