Who We Are | Welcome | History

THE JOURNEY OF HOPE FOR HIE

And where there were three connecting, there were hundreds and thousands of others who needed to know they weren’t alone.

“Hope for HIE remains one of the proudest things I’ve ever been involved in and it’s so brilliant to have seen it grow into what it is today. Exceeds the wildest dreams we ever had for it.” — Claire Greer

Hope for HIE’s inaugural mission statement was developed, three pillars of the organizational mission were established – Awareness, Education and Support, the logo was designed, and work was done to look at establishing Hope for HIE as an official nonprofit organization, looking at various countries programs to decide where it would be best to plant the first flag in the ground. 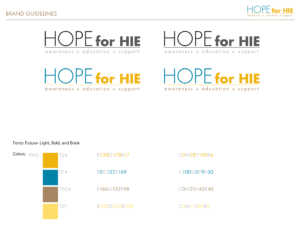 After the three original founders life circumstances and interests changed, new volunteers showed interest in moving forward the work to become a confirmed nonprofit organization. The original Articles of Incorporation had lapsed in Illinois, so Betsy Pilon found probono legal counsel for the organization to resubmit in the State of Michigan. The new Articles of Incorporation were submitted and approved. The first Hope for HIE Board of Directors was formed and the mission statement was modified.

“To foster hope in families affected by HIE (Hypoxic Ischemic Encephalopathy) through support, education and awareness.”

Hope for HIE’s social media presence began to grow, connecting families through the main parent support forum to 500 members from all around the world. Twitter, Pinterest, Google+ and others were added, educational resources began development, and the IRS confirmed Hope for HIE as an official 501c3 nonprofit organization. In November, the first fundraising campaign for the organization kicked off, and the official mailing address for Hope for HIE became active. 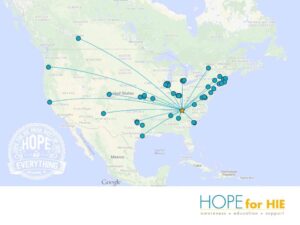 Hope for HIE launched global HIE Awareness Month in April, with a comprehensive plan to connect more families to support and bring awareness for the diagnosis. The first theme was “Hope is in the Journey”, which is a theme and tagline that resonates today! We also began connecting with a variety of researchers, consulting on communication projects across the US, Canada and the UK. Hosted retreat in Texas for 50 moms. 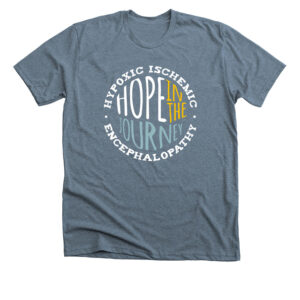 Hope for HIE’s support network grew to connect over 2,500 families, worldwide, expanded subgroup offerings, hosted five regional retreats for parents and families, improved search engine placement in a competitive landscape where misinformation outspends us as an organization, formalized loss support and hosted the first global HIE Remembrance Day on April 20th with a worldwide wave of light to show support for HIE loss families. Hope for HIE, led by Andy Chrestman, hosted its first in-person fundraiser in New Orleans — Hops for Hope. We hosted our first Hope for the Holidays giveaway, giving over $10,000 worth of equipment and items that insurance doesn’t cover to improve the quality of life for our families. 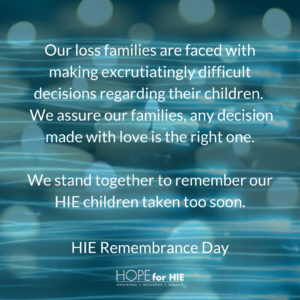 Hope for HIE expanded topic and location-based support groups, building out volunteers and connecting families in ways that help them process their journey. Printable resources were redesigned and rewritten to better reflect current branding and design standards. We expanded our social media presence onto Instagram and hosted a “Hope is an Adventure” themed Awareness Month. We also engaged TREND Community to analyze our information sharing and discover the largest unmet needs of our community. 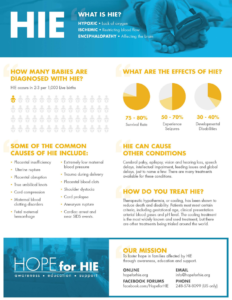 Hope for HIE began a significant growth curve, starting with being recognized by Facebook as one of the top engaged communities at the 2019 Facebook Communities Summit, invited to participate in several key collaboratives in the child neurology space including the Infantile Spasms Action Network, Rare Epilepsy Network, Newborn Brain Society, Neonatal Seizure Registry, and more. We took a delegation to the American Epilepsy Society to advocate for HIE families, and connect with researchers and clinicians. We grew to connect over 5,000 families, introduced newly diagnosed family support packages distributed to over 500 families in NICUs around the world, hosted two regional family retreats, launched a significant educational campaign surrounding Infantile Spasms with a grant from the Child Neurology Foundation, and began planning for organizational changes to support the growth. 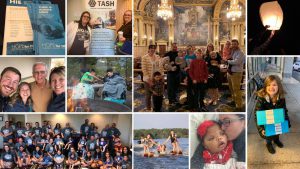 When the world shut down, Hope for HIE got going. We added our multidisciplinary Medical Advisory Board, developed a comprehensive educational series on the hottest topics that families expressed the need for knowledge in, improved health information literacy in our community, hosted countless online live events, introduced our Partners in Hope program for corporate giving and partnerships, presented to many NICU and child neurology clinicians the benefits of improving care, communication and connection for HIE families, and launched our Hustle for Hope Virtual 5K event. Due to the exceptional dedication of our community funders, including the largest gift to our organization made by one of our Partners in Hope, we were able to bring on our first Executive Director to move the organization forward full-time. We developed several new printable resources to make HIE more easy to understand as well. 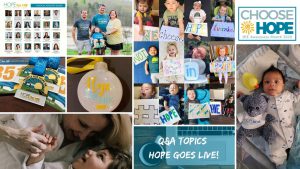